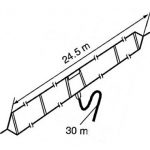 Last JOTA we took an ICOM AH-710 wire antenna with us for some experimenting. My friend Henk PE1PEX bought this antenna a while ago just out of curiosity. And rightly so because this antenna turns out miraculous.

The antenna design is from a Tilted Terminated Folded Dipole (T2FD). “It is a general-purpose shortwave antenna developed in the late 1940s by the United States Navy.”

This antenna combines two interesting properties:
– it has broadband capacities (it has a reasonable VSWR from 5 – 30 MHz);
– it’s a closed dipole principle what results in more quit receiving.

Of course it is a compromise antenna but in my opinion an interesting compromise. It also has a low foot print for the frequencies it works on, but it is not as efficient for every frequency. It also can handle ‘only’ 150 watt (at least the ICOM version). Although the price for a new one is a tad fierce (around $400), when I spotted this antenna as a bargain with my favourite HAM-radio dealer, I did not hesitate to buy one. I thought the resistor network in the top was kind of a secret but as it turnes out, that’s not the case. Actually it is kind of a simple construction. Feed point is around 300 Ohms so you need a 6:1 balun to transform your impedance to 50 Ohm. Then you take a resistor of about 20% more than the output impedance of you balun. In my example 360 Ohm. Important is to use non-inductive resistors. You can increase the maximum handling power by raising the wattage of the resistors.

My first impression with the AH-710 was very good. I only had little time to play around with it, but I could spent about an hour on the middle of the day and about an hour in the night. I immediately noticed it’s quite receive properties. Our reference antenna at the time was a ZS6BKW on around 20 meters higher then the AH-710 (10 meters high). The ZS6BKW is not a bad antenna, but it picks up noticeably more static then the AH-710. Signals where just as strong or stronger on the AH-710 as on the ZS6BKW. So in the receiving part it is a very nice antenna to listen on. I figured: then the compromise must be in the transmitting. So I dit a few CQ’s in morse switching between those two antenna’s and watched back the results on Reversed Beacon Network. It turns out the results where about the same for both antenna’s. Which is remarkable since the AH-710 hung about 20 meters lower to the ground then the ZS6BKW.

All in all I think it is an interesting antenna that requires more research. I have to figure out a way to hang up this antenna over my property since I can not house this kind of measurements. Maybe I construct a shorter one myself and will test that against my ICOM AH-4 coupler and end-fed wire.